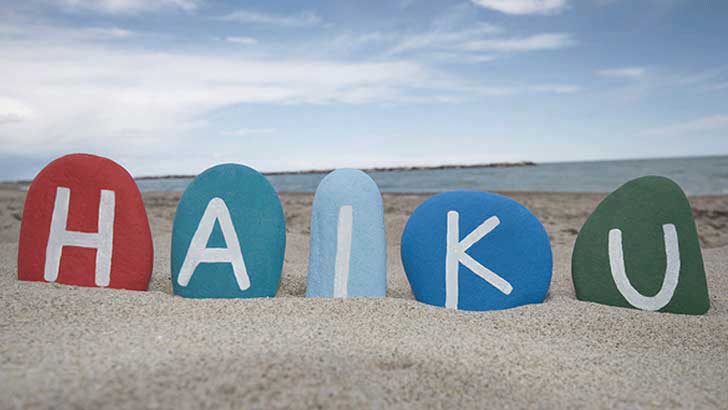 Haiku is an ancient form of Japanese poetry often containing (in English) a total of 17 syllables shared between three lines that are arranged in a pattern of 5-7-5. The fist line consists of 5 syllables, the second line 7, and the last line contains another 5 syllables.

It is important to note that the original Japanese haiku was measured in sounds, or "breaths," not English syllables. The 5-7-5 approach was a rough approximation. Many traditional Japanese and English-language literay haiku are much shorter than the 5-7-5 format of the West. That said, poetry is art and 5-7-5 is still very popular today. Some Japanese poets still embrace that framework.

For many young students, haiku begins and ends with 5-7-5. My then 9-year-old nephew came home from school one day anxious to share his first haiku:

Delighted that he has been introduced to the world of haiku and impressed with the flexible use of "oohs" and "aahs" to meet a syllable count, I didn't have to the heart to tell him that his monkey-inspired poem isn't technically a haiku.

So what is missing?

Some Characteristics of Haiku

It's a lot more complicated than we thought, right? Traditional haiku usually focuses on two very simple subjects while providing an interesting or unexpected perspective. Like a good joke, the first part can serve as the set-up, while the second part delivers the punchline.

First autumn morning:
the mirror I stare into
shows my father's face.

That's a poem that has everything:

Some modern poets reject the entire notion of 5-7-5, prefering the shorter breaths of the Japanese originals (a haiku should be able to be said in one breath.) Many also choose to omit the seasonal reference. Photography has also joined the ranks of some modern haiku, updating traditional haiga (haiku brush painting)

Haiku is Accessible... but Can Take a Lifetime to Master

Whether embracing 5-7-5 or working in modern haiku, haiku is an amazing art form. While a child can understand the very basics of format and structure, truly mastering haiku can take a lifetime. Come as you are, get comfortable and join us as we continue to work on our craft together!

Make sure you don't miss a thing. We won't sell or share your email.